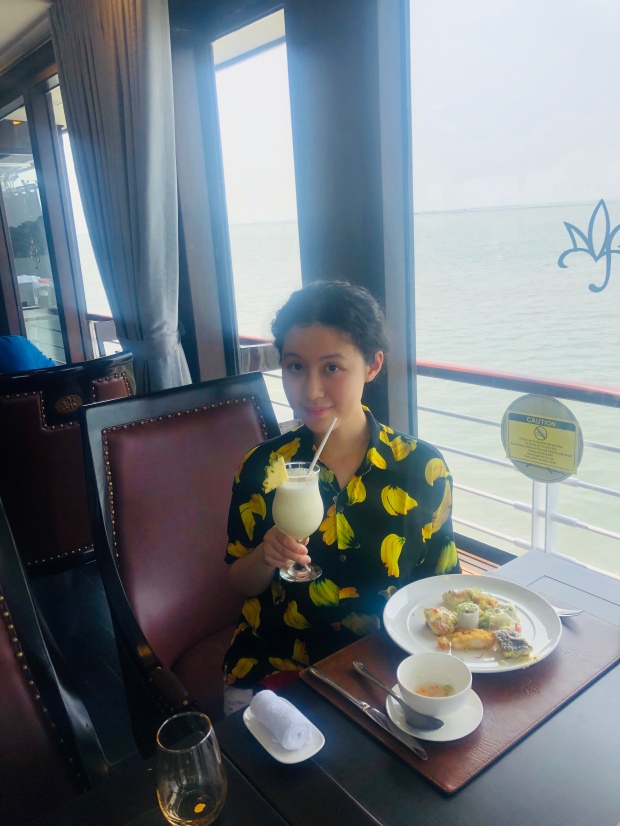 My life has never been this routine and packed — classes, readings, dining hall meals, exercise. I’ve picked up running again. Weaving between Georgian buildings in the darkness, feet pounding on empty pavements, a flash of headlights, the smell of wet grass, a sliver of the night chilly between my slick fingers, my figure solitary between marble sky and solid earth.

For the first time ever, I’m taking 6 courses in a semester (one of them being an Independent Study) but still, my schedule looks deceptively doable — continuing my streak of no classes on Fridays! But, quite honestly, I’ve been feeling like I’m on a knife-edge. One misstep or a brief surrender to procrastination, and the wheel throws me off. Keeping my balance precipitously on the tightrope of discipline. It’s hard to finish all the readings but I really do want to. 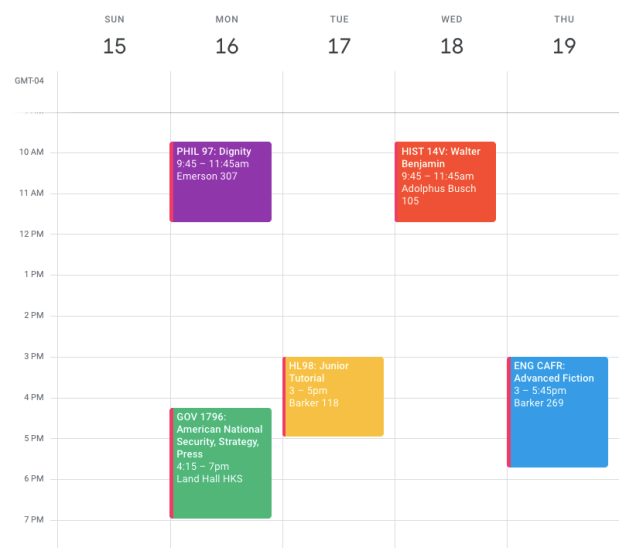 Piqued by a summer immersed in international news at CNN, I decided to take my first Government class at Harvard (eons ago in high school, I once took Geopolitics at NUS).  It’s held at the Harvard Kennedy School, with a small class that features a mix of Kennedy school students, National Security Fellows, cross-registered students, and undergrads.

The class is memo-style with national security cases on likely real-world scenarios ranging from North Korea’s ICBM tests to Chinese intervention in Hong Kong to Homeland Security and immigration to cybersecurity. The three professors offer different views/approaches to each of these security challenges. One fascinating dimension is the press: How does domestic press coverage inform/intrude national security decision making? How does social media (Twitter, for example) transform national security strategies? (Think: Trump.)

Fun fact: PM Lee Hsien Loong was a former student in this course (yes, it has been running for a long, long while).

My first History department course. 😳 (This is quite the semester of experimentation.) I still feel slightly out of my element due to the European focus of the class. Sorel on the myth of the general strike? Scholem on Jewish mysticism? Postlapsarian wha—?

But, I’m persisting. We are about to read Benjamin’s Origin of the German Trauerspiel this coming week and it’s apparently one of his most difficult pieces of writing. Let’s see how that goes.

Why am I taking this class? I’ve previously encountered Walter Benjamin only in snippets, sporadically in different courses across departments – for instance, “The Task of the Translator” in my freshman seminar on the creative work of translating, and his writings on the flâneur in Global Fictions. My academic interests lie in cosmopolitanism and the diasporic individual in the age of globalization/postcolonialism as well as at the intersections of phenomenology and literary subjectivity. Time to trace the roots of these ideas to one of the fathers of cosmopolitan thought.

If you’d like to give Benjamin a shot, here’s a short essay, “On Language as Such and on the Language of Man.”

My 4th creative writing workshop at Harvard. So excited! The first workshop I’ve ever been to in my life was Intro to Fiction with Claire, in the fall of 2017. I still remember when I was first rejected for the class and then miraculously got off the waitlist (Embracing Rejection At Harvard (also unexpected surprises)) — life works in mercurial, magical ways. Somehow, I’m just glad that I’m still writing, frantically, confessionally, unabatingly.

That Freshman Fall workshop ended up completely altering my college trajectory (and aspirations). While before I had jotted down snippets in notebooks or started too many novel drafts left unfinished, I wrote my first full-fledged short story (posted as a Valentine’s Day short story on the blog: April, I Arrive on The Shores of Your Love) in that course. It only sank in then that ‘writer’ had contours that I could touch and maybe eventually fill.

This semester, I’m working a projected longer work. It’s a speculative fiction piece about celebrity worship, mass culture, and the future of media in 2035. If you have thoughts on this or some wild ideas, or if you just want to orate about a futuristic world, GRAB A MEAL WITH ME AND TALK TO YOUR HEART’S CONTENT.

There’s just three of us and our tutor. We create our own syllabus collectively — each of us decides the readings/topics for around 3 weeks. I like the autonomy but the fluidity of structure is quite unprecedented. For my weeks, I’m thinking of these topics:

What would you study, if given the opportunity to craft your own syllabus?

We are studying the concept of dignity through its historical foundations (four influential traditions include: the Stoic, the Catholic, the Kantian and the 19th century German), dignity’s relationship to human rights, and dignity’s discussion in medical ethics. Dignity is embedded in political and legal discourse, so the readings cover many genres (legal cases, philosophical texts, literature, political declarations/treatises).

Is dignity a ‘squishy, subjective notion’ as Steve Pinker calls it? Or is it essential to the conception of human rights? Ah, how hard it is to define dignity; how omnipresent it is in our lives.

I’m tentatively working on a love story set in future Hong Kong in a time of crisis and collapse, in the vein of ‘Love in A Fallen City’ （倾城之恋）.

After a long, wonderful conversation with Professor Wang about speculative realism, the Hong Kong protests (the city is a crucible of capitalist & socialist forces), post-humanism, and the biopolitics of the state, I’m brimming over with possibilities and the daunting thought that every story — no matter how outrageous — needs to be grounded in the conservative/ordinary/minute human concerns. The political cannot be brushed aside.

Read about my classes in previous semesters: